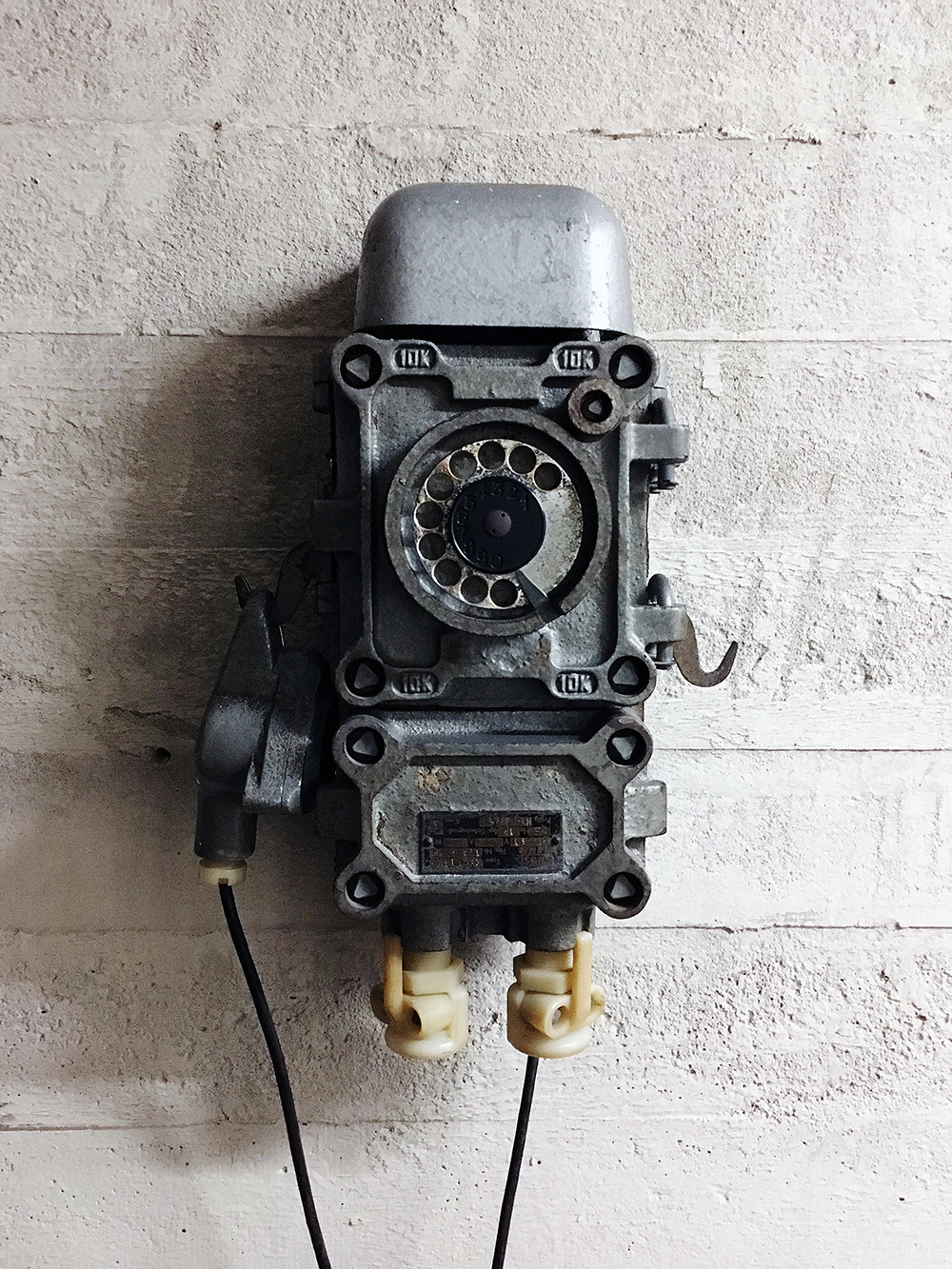 There are two very different aspects to a visit to the Boros Collection, however, at the end of the visit it almost feels that they are converging into a new whole.

One element is the obvious history of the location and venue, the other is the current use as an art space.

The Reichsbahnbunker Friedrichstrasse, designed by Karl Bonatz and built in 1943 by POW, was taken over by the Red Army in 1945. Both the Russian Secret Service and subsequently the Stasi used the Bunker as an interrogation prison until 1951, after which it became known as the ‘Banana Bunker’ due to fruits imported from Cuba being stored there. After the Fall of the Wall in 1989 it became a club venue and party location for the Techno and SM scene during the 1990s. In 2003, the art collector Christian Boros bought the building, and began the renovation process as well as the installation of a penthouse on top of the bunker as a home for him and his family. 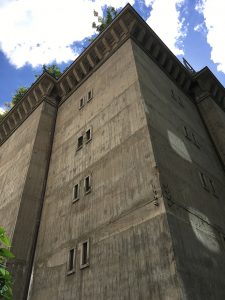 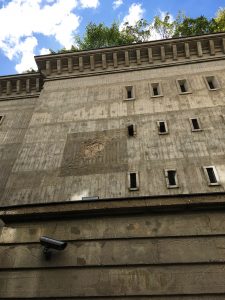 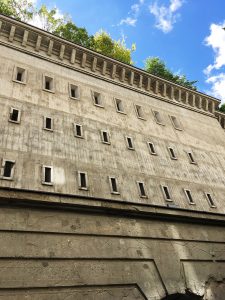 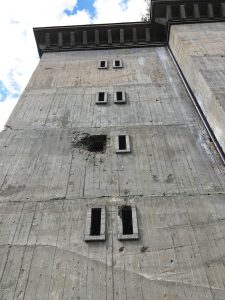 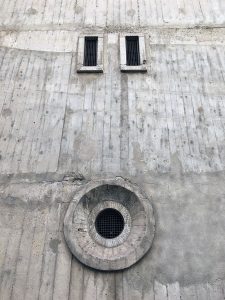 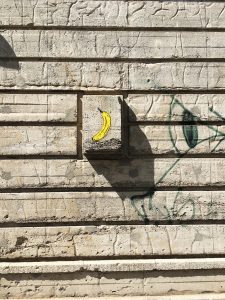 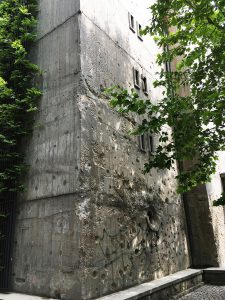 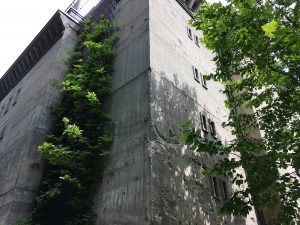 The design of the floor plan is intriguing, from above it looks like a labyrinth. 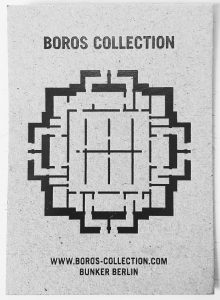 The arrangement of the rooms on the five levels and the restrooms attached to them at the end of the design, totalling 180 rooms, is the same throughout each floor of the bunker. The rooms all have low ceilings, the bunker’s walls are made of 1.8 meters thickness, and the windows visible from the outside of the building do not exist on the inside – they were installed only from the outside to make it look like a normal building. The same goes for the benches attached to the building on the outside, for the only purpose of not making it look like a bunker. The bunker was built to outlast the war, it was meant as part of the design of the wider design of the new city.

The bunker’s intertwining staircases were supposedly inspired by the famous Da Vinci spiral staircases, 4 and 4 totalling 8 altogether, and are today protected by listed structure regulations (no changes were allowed to be made to them during the renovation process).

The contemporary art collection covers the whole of the five floors of the bunker. Apart from the entrance and hallway to the bunker, photography inside the building is not allowed. 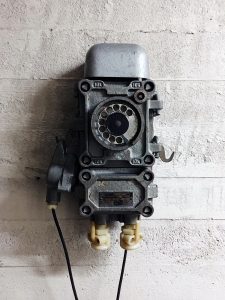 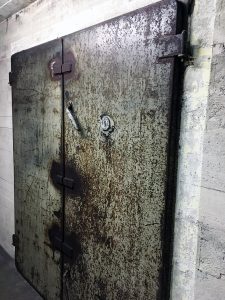 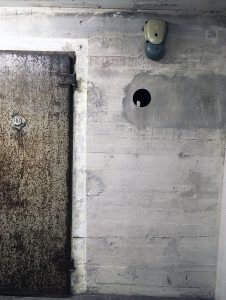 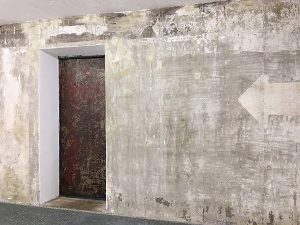 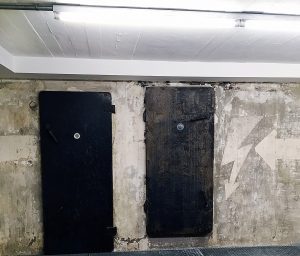 There were three artists pieces that stood out to me for different reasons: 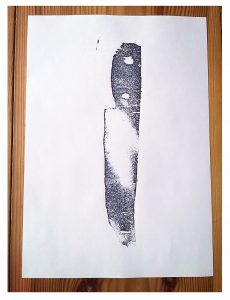 The installation piece Arma Branca draws the viewer in by letting him/her participate in the printing of an image of the weapon (in this case a knife). The above print was made by myself during the visit. The interactivit renders the subject matter more real. It also conjures up  an understanding of how basic this weapon is, and what it might have felt like to be living in those times.

The installation fits the space well, one room with black paint still on the walls (from the bunker’s club history). The black paint correlates with the red curve display. The arrow is painting upwards, placed on top of a trampoline, representing endless human growth. Does such a thing exist? The horse to me represents nature and other species that are being made extinct at the same time as the human being is expanding.

Justin Matherly’s sculptures are inspired by the Nemrut Dagi mountain in Turkey, a royal tomb dated 69–36 b.C. The site displays large stone statues with massive heads including gods, lions and eagles. Since the late 19th Century the area is an excavation site and today also a tourist hot spot.

This website uses cookies to improve your experience while you navigate through the website. Out of these, the cookies that are categorized as necessary are stored on your browser as they are essential for the working of basic functionalities of the website. We also use third-party cookies that help us analyze and understand how you use this website. These cookies will be stored in your browser only with your consent. You also have the option to opt-out of these cookies. But opting out of some of these cookies may affect your browsing experience.
Necessary Always Enabled
Necessary cookies are absolutely essential for the website to function properly. This category only includes cookies that ensures basic functionalities and security features of the website. These cookies do not store any personal information.
Non-necessary
Any cookies that may not be particularly necessary for the website to function and is used specifically to collect user personal data via analytics, ads, other embedded contents are termed as non-necessary cookies. It is mandatory to procure user consent prior to running these cookies on your website.
SAVE & ACCEPT