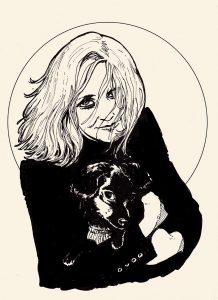 Heike Schneider-Matzigkeit is a photographer and graphic designer working in London and Berlin. Her work has been published prolifically and internationally in major books and publications such as NME, The Guardian, The Independent, Neo2, The Fortean Times amongst others. Her editorial shoots have focused on many notable artists such as Suede, Primal Scream, Aimee Mann, Gary Numan, Ladytron, Sonic Youth, Melissa auf der Maur, Echo & The Bunnymen, Candy Clark, Richard O’Brien, The Kills and her photo of Amy Winehouse appeared on the cover of NME. Additionally, her live photography has resulted in iconic shots of the likes of Smashing Pumpkins, Franz Ferdinand, The Libertines, Manic Street Preachers, Jane’s Addiction, PJ Harvey, R.E.M., The Cramps, Interpol and Iggy Pop.

Clients include The Independent on Sunday, The Guardian, PETA, Virgin, NME.

Academically, Heike Schneider-Matzigkeit studied at London College of Printing and the University of Westminster (BA Hons ‘Film, Video & Photographic Arts’) as well as Royal Melbourne Institute of Technology, Australia. In the autumn of 2019, she graduated from the Manchester School of Art receiving a distinction on the Masters Degree (MA) ‘Graphic Design & Art Direction’.

Heike Schneider-Matzigkeit currently spends most of her time in Berlin, having previously lived in London for fifteen years. Whilst she co-founded and co-edits culture and art magazine ‘Splendid Berlin’, her first solo photography book ‘Berlin Reflections – Antlitz Berlin’ was exhibited at both the Frankfurt and Leipzig book fairs in 2016 and 2017 respectively. Current creative projects include a collection of letterpress-designed books as well as new portraiture series ‘Dogs and their Humans’ of which a selection of photographs have recently been featured on Italian Photo Vogue.

This website uses cookies to improve your experience while you navigate through the website. Out of these, the cookies that are categorized as necessary are stored on your browser as they are essential for the working of basic functionalities of the website. We also use third-party cookies that help us analyze and understand how you use this website. These cookies will be stored in your browser only with your consent. You also have the option to opt-out of these cookies. But opting out of some of these cookies may affect your browsing experience.
Necessary Always Enabled
Necessary cookies are absolutely essential for the website to function properly. This category only includes cookies that ensures basic functionalities and security features of the website. These cookies do not store any personal information.
Non-necessary
Any cookies that may not be particularly necessary for the website to function and is used specifically to collect user personal data via analytics, ads, other embedded contents are termed as non-necessary cookies. It is mandatory to procure user consent prior to running these cookies on your website.
SAVE & ACCEPT