Visit to Brecht-Weigel-Memorial & Grave in Berlin 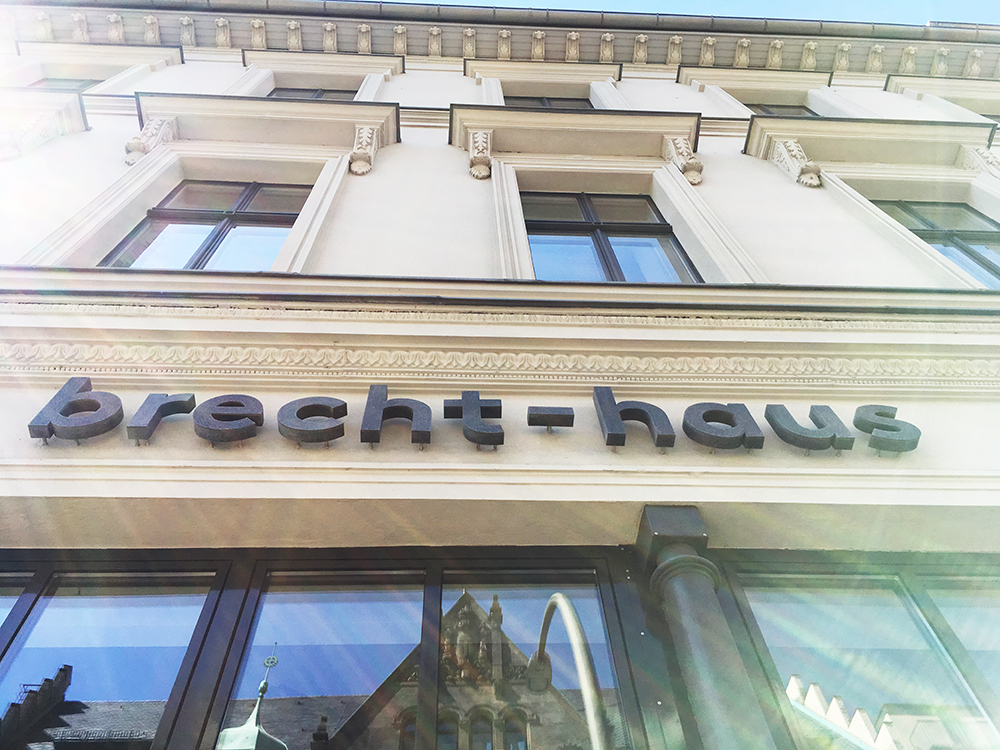 Bertolt Brecht’s grave and that of his second wife, Helene Weigel, are located on the beautiful Dorotheenstaedtischer Friedhof in Berlin Mitte. It’s a peaceful and sun-filled cemetery right in the city centre, a city that disappears right behind the graveyard walls.

Next door to the cemetery is the Brecht-Haus, the house he lived at from 1953 until his death in 1956. At the time, it was based in East-Berlin. Helene Weigel survived her husband by 15 years, and arranged for his apartment to stay the way it was on the day he died. She also organised the Brecht Archive in the same house, Chausseestrasse 125, where she herself lived in the garden apartment until her death in 1971. Today, the Literature Forum is held in the Brecht-Haus on a regular basis.

Entering the apartment on the first floor, a strange quietness welcomes me. It feels like stepping back in time – more than 60 years ago and a long time before today’s modern world of smart phones, the internet, and constant communication. The room I first walk into has various book and magazine shelves, a chair and table (with ashtray), and three masks on the wall. One is of a young girl, one of an old man, and the third one of a demon. The main room is large and flooded with light, it has three desks (one with a typewriter), a big wooden wardrobe, a corner with table, seats and Brecht’s chair, as well as beautiful views onto trees and the cemetery next door. It certainly feels like the heart of the house. A small bedroom goes off to one side, which just about fits a small bed, with one window and a low door leading to the toilet. There is a Chinese scroll on the wall of a seated man on a bench that resembles a depiction of Konfuzius. Brecht entitled it ‘Der Zweifler’ (or ‘The Doubter’) and wrote a poem inspired by the man’s potential thoughts in 1937.

The bedroom is the room where Brecht died in his bed in 1956. Leaving the main room of the apartment, I suddenly find myself standing in the second staircase, to the back of the house, ushered out of his world and back to today.

I’m intrigued by the objects Brecht has chosen to display on the walls of his house, from the three masks (representing youth, old age and evil) to religious symbols (Christian). Then there is the old scroll of ‘Der Zweifler’, and the welcome poster to the Berliner Ensemble (the original painting is by Picasso to commemorate the World Festival of Youth and Students for Peace, Berlin, 1951): a poster depicting the dove of peace, and four different types of man, making up a square image and yet a whole one at the same time. 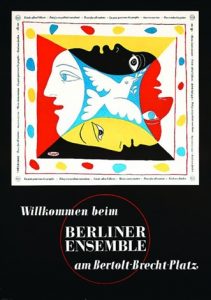 Afterwards I also briefly visit Helene Weigel’s apartment on the ground floor. Then I head over to the cemetery to find both their graves. On my way it strikes me how her collection of books also featured publications from the 1960s, which is only logical for she lived through that decade, and Brecht’s collection didn’t. His time stopped in 1956. It makes me ponder how much we are dependent on and caught in the times that we live in, and everything that comes and goes with that time period, in terms of society, culture and politics. Only in death do we finally escape.